Should I get My Wall Outlets Replaced? 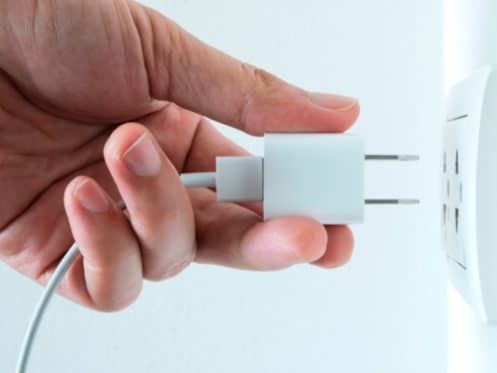 Signs That Your Electrical Outlets Need to Be Replaced

Electrical outlets start to degrade with age. The older an outlet is, the higher the chance it will malfunction, electrocute someone, lose power, or cause a fire due to worn-out wire coating, settled wires, and corroded metal. The lifespan of an electrical outlet depends heavily on the type and quality of the receptacle. High-quality outlets last over 20 years, but low-quality outlets only last around five years before needing to be replaced. If you don’t know how old your electrical outlets are, you can make a rough estimate based on the age of your home.

Two-prong outlets are very outdated, but they’re still made and sold in popular hardware stores and installed in certain buildings. The difference between two-prong and three-prong outlets is more than just the number of holes in the face. The third prong, which lies at the bottom of each socket, is a ground wire that is necessary for preventing electrical shocks and fires. With two-prong outlets, the electricity doesn’t have any ground to safely move away from any device or person who may be in contact with the outlet when there is a short circuit or a power surge, immediately causing damage to devices as well as injuries or death to people nearby. Even if no one gets shocked, the excess electricity may start a fire as it tries to escape within the wall.

Two-prong outlets are still technically up to code for homes as long as they’re not damaged and they function normally. However, they pose a significant safety risk and are better replaced with three-prong models. Do not attempt to replace two-prong outlets yourself. The wiring involved with setting up two-prong outlets is different from three-prong outlets. If installed incorrectly, the new outlet may pose an even greater danger and start a fire.

Many poor-quality or old outlets can’t handle even moderate electric currents without faltering in performance. You may notice devices that are charging randomly or lights that are plugged into the outlet starting to flicker. This indicates that they’ve briefly disconnected from the power supply before reconnecting. Fluctuating power in an outlet is more than an annoyance. If the power in your outlet is fluctuating, it may mean that there are weaknesses in the wires or the outlet itself that pose a safety and fire risk. Newer and higher-quality outlets are able to handle high electrical power consistently and safely.

If your outlet face is cracked, it may be exposing terminals and metal contacts that pose a massive risk of electric shock to anyone who touches them or anything plugged into the outlet. These exposed parts also create a significant fire hazard. Cracks may be caused by pulling plugs out of the socket by their cords, roughly plugging in or unplugging devices, or overheating wires. Even the smallest cracks in the face of an outlet should be taken seriously. Replace cracked outlets as soon as possible.

When an outlet becomes loose, many people view it as being nothing but an inconvenience. Such outlets are difficult to plug into, and they wobble in place, but they’re usually functional enough to use. The problem here is that a loose outlet either got damaged at some point or was installed incorrectly, which could indicate that the outlet is less safe to use than it seems.

Even if it’s not causing problems now, using the outlet while it’s loose causes it to rub up against drywall, wood, insulation, and other wiring, which will damage the wires, connectors, and other important parts of the outlet. The resulting damage could easily start a fire or cause someone to electrocute themselves. Loose outlets can be easily repaired by simply having a professional set it and screw it into the wall properly, but replacing the outlet entirely is a better option since you don’t know for sure what damage was done to the outlet to make it loose or how much damage it received after becoming loose.

An outlet that is exuding heat or smoke in any way is a serious red flag and needs to be addressed immediately. If you notice heat, smoke, or signs of heat damage like discolored or melted plastic, shut off power to the outlet immediately. Even if you don’t plug anything into the outlet, the heat, smoke, discoloration, or melted plastic indicates that there is a major issue within the outlet and that it poses a severe risk of shock or fire no matter whether the outlet is in use or not. Don’t attempt to restore power to the outlet or use it until you’ve had it professionally replaced.

Visible sparks coming from the outlet are one of the most hazardous indications of a failing receptacle. As with an overheating outlet, power needs to be shut off from a sparking outlet immediately. To prevent shocks and fires, the outlet needs to be replaced as soon as possible before ever restoring power.

Electrical work is very dangerous. It’s always best to leave this work to the professionals. If you have electrical outlets that need to be replaced in order to make your home safer and more functional, you can count on our professional electricians at Arc Angel Electric to replace any outlet in a quick and skilled manner. We also provide installation and repair services for generators, indoor lighting, electric vehicle charging stations, wiring, smart home automation, surge protectors, electrical panels, and remodeling projects. If you’re interested in learning more about any of these services and you live in or around the Cumming, Georgia or Mount Pleasant, South Carolina areas, contact us at Arc Angel Electric today.